It's finally out on Google Play! It's been out for a few weeks on itch.io too; huge thanks to all the early players for helping me find bugs & improve things.

I haven't really kept a dev log and I thought it might be nice to write a bit about it here. Some people ask me how long it took to make Slice & Dice and I can never give a proper answer, maybe this will explain why! I was also working as a programmer for a lot of this time which made it a bit exhausting to continue coding at home. 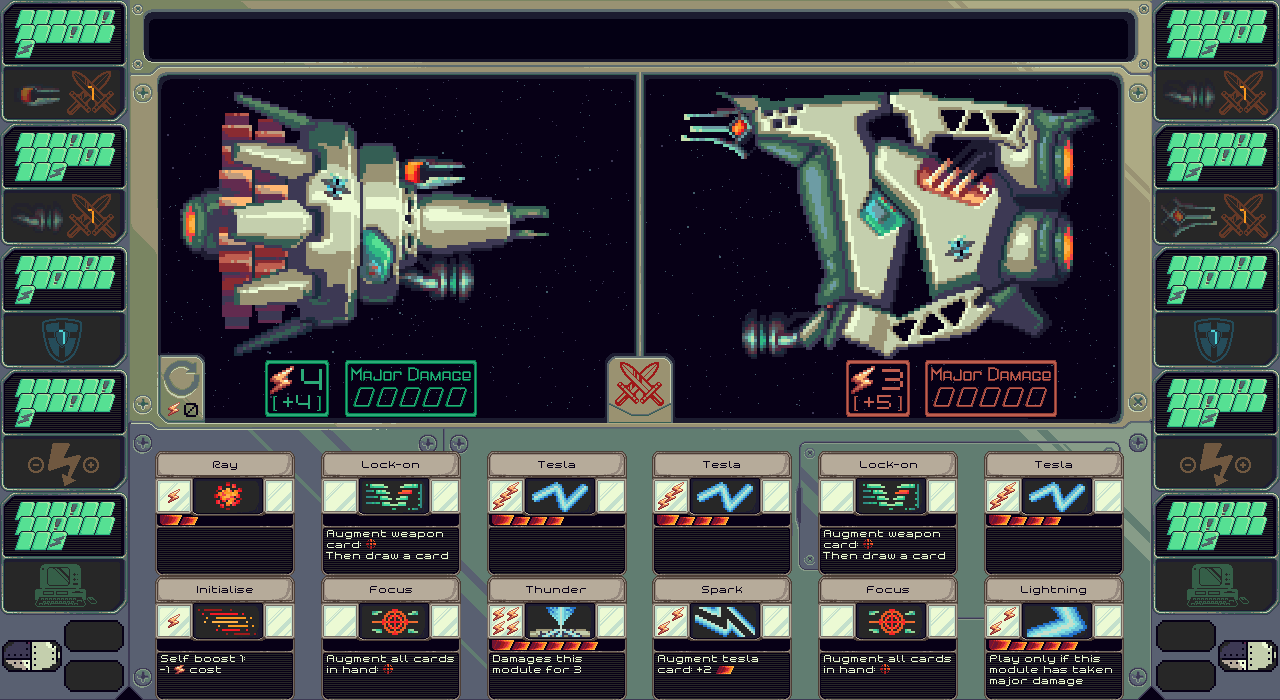 Event Horizon was one of the bigger games I've worked on, though I had only been programming for a couple of years so it was a bit of a mess. It was a ship vs ship card-based combat game; each ship had different weapons and subsystems which provided cards and if they got too damaged then you'd lose their functionality. Peter Queckenstedt did a great job with the art for the game. I was really happy with the gameplay, there were lots of interesting decisions on most turns.

Unfortunately I was too inexperienced to turn it into a proper game. The UI was very complicated, enemy turns were confusing. It was mostly just one-off fights, I started to make a tactical map screen but I couldn't make it fun. I consider Slice & Dice to be a kind of spiritual successor to Event Horizon though, so it's worth mentioning here. 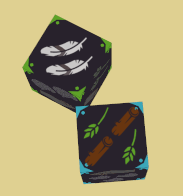 I wanted to make a game where your dice represented people and you could level them up! I did a lot of research around cool 2D ways to represent dice in games, but I couldn't find any that felt good to me. I didn't really want to delve into 3D but I had no choice. It took me a while but I eventually got it working: I could define graphics for sides of a dice and detect which side landed face-up!

I got a basic game working but unfortunately the gameplay didn't quite click. I learnt a lot making it and I knew I could make this dice idea work somehow. 75mb windows download 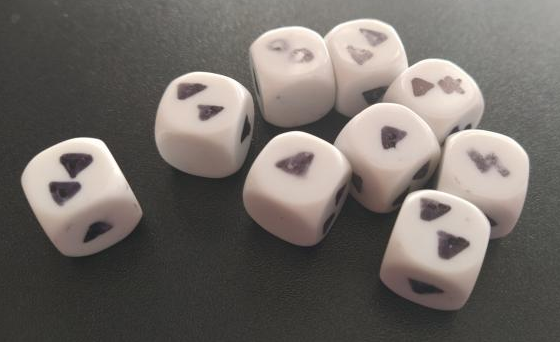 I was really happy with how levelling up the dice felt, so I decided to try turning it into a combat game. Plus now I had a lot more coding and design skill, I thought I'd be able to use Event Horizon's combat system but make it simpler & more streamlined. I was at a friend's house doing a mini boardgame jam when I prototyped the game for the first time. I had some blank dice and drew some shield, sword and magic sides on them. I don't remember the exact rules, though they were very similar to the current game. I could see the game had potential from that, though it was a bit awkward to run the game IRL. 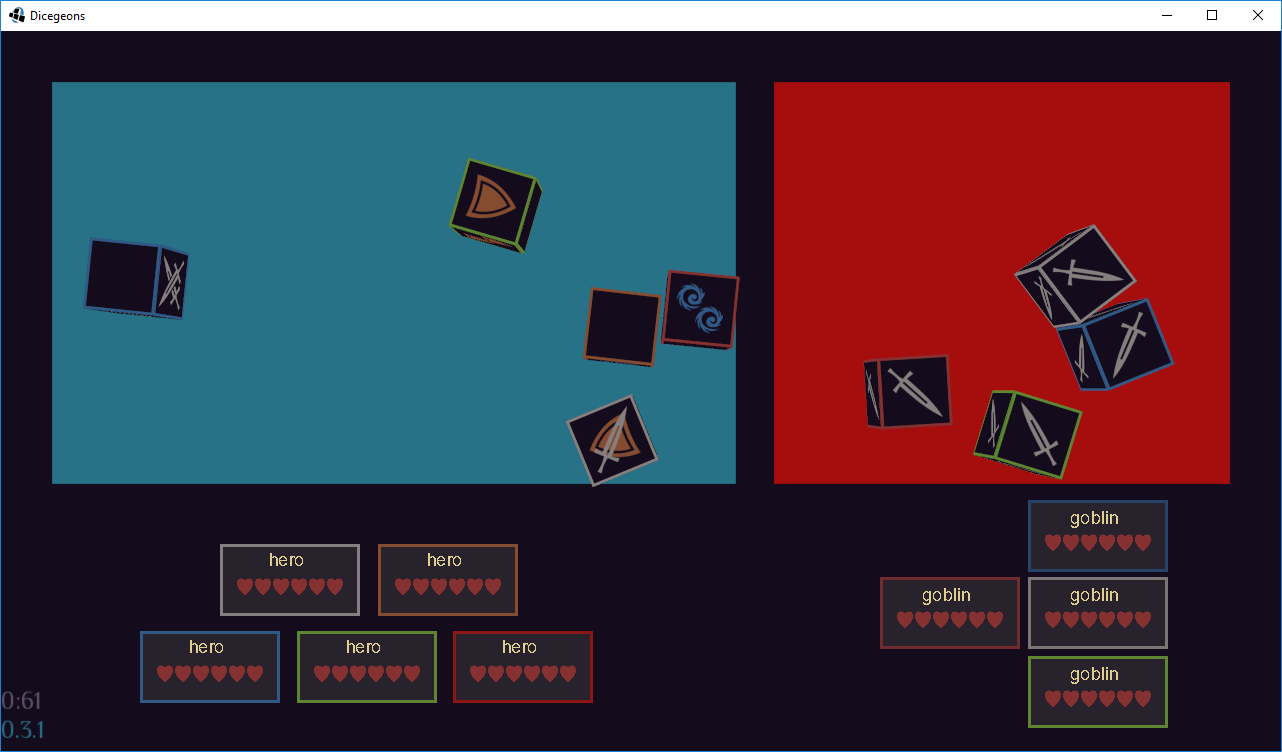 I reused a lot of code from Village and eventually got the game functional again. It was a lot simpler and more fun than Village. 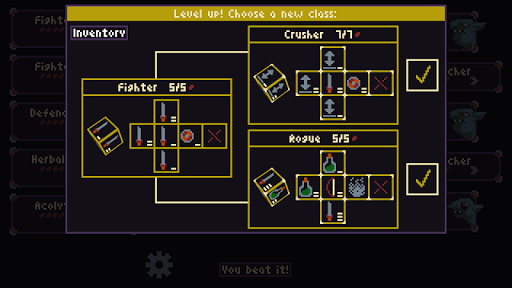 I decided that I was going to finish this game and found a name I liked and reserved it on the Play Store and App Store. I also changed the game to use pixel art; I have a lot more experience with this style of visuals. I created an open beta on the Play Store around this time which turned out really well. I got a lot of emails and feedback from players, it was very motivating to hear that so many people were enjoying it.

One thing that's nice about not having a publisher or deadline is that I'm free to make big gameplay changes. It does have disadvantages: it takes up a lot of time and players who like the old systems will miss it. But I think it's good to rethink things before they get too established, especially if I can see problems with it in the future. 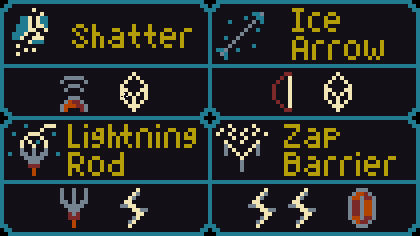 A change I made that was not very popular was the removal of combo abilities. At this time, the spell system was quite different. You had a deck of spells which you drew 3 from each turn, and you had to charge up individual spells with magic. I added some spells that required swords and shields in addition to mana. I also added some special combo-abilities that appear if you have certain combinations of abilities on your heroes! These were fun to make and added a cool sense of excitement and discovery as you played, because even if you've seen all the heroes there may be some combo abilities you haven't seen yet!

My reason for removing it was that it was too complicated. For players, it's unclear exactly how to get them, unclear which ones exist, they took up spell slots randomly which was sometimes annoying, plus the rules around exactly which sides can charge which spells was unintuitive. For me, adding any new sides would dilute things a lot and I'd have to think of new combo abilities. The concept of combo abilities is very cool though, I have a couple of ideas for how to bring it back in a simpler and hopefully more-fun form. We'll see if it works out!

The magic system now is a lot simpler and I'm pretty happy with it! I think mana in general is a bit too strong, but it may be a bit late to change this. We'll see!

I quit my job and decided to live cheaply and pursue some projects, including finishing Slice & Dice. I spent about half the year on Slice & Dice and the rest on other misc programming stuff, I had a great time and loved being able to focus properly. I set up an itch.io page for the game and improved the desktop version a lot. I'm a big fan of itch.io, it's very intuitive for developers.

I created a discord server for the game and it's been fun interacting with the people who enjoy the game. Last month I released the full game on itch. Soon after this, I released on the play store and that's the story up to now.

I have skipped the art from the rest of the story because it's difficult to match up all the dates! The game started off just my terrible programmer art. I have a friend who likes doing pixel art and he offered to make some; it was great having some beautiful pixel art! There were no hero portraits in the game for a long time though.

After I saw the potential in the game, I tried to hire some pixel artists but it didn't really work out with any of them. I eventually decided to do all the art myself and maybe hire someone once the whole game was done. 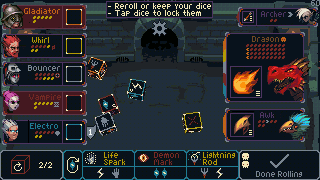 Then I got an email from a fan who wanted to work on the game. He drew over some screenshots and sent them to me and they looked amazing. I think that working with someone who enjoys and understands the game is a huge plus so I decided to team up.

I've been talking mostly about my end of it in this article because that's what I know most about, but the art for the game turned out really well and, if the game does well, it'll be a huge part of that!

I need a break from gamedev. I don't know how long I'll take but I do have some plans for Slice & Dice in the future. Some of this depends on how successful the game is, and I don't promise anything.

I have a huge list of ideas for how to expand the game. Slice & Dice is a bit of a toybox for me, it's been really fun adding anything and everything to it. I would like to release at least some extra stuff for free this year but we'll see.

An iOS release is quite likely, I have a friend who can build it for his iPhone but I'd like to wait for a bit to fix any remaining bugs so he doesn't have to keep updating it.

On Steam there is already a game called Slice & Dice which probably makes things awkward. I'll look into it at some point probably.

libGDX does not easily export to other platforms though, so this will probably be all that is possible.

Pepeboi 2021-09-18
Thank you for creating this game.
Hamjul 2021-11-16
It was all i want from dice games, thanks. Reslly lookin forward to this one
y4 2021-12-15
how to unlock all the classes? are some classes removed or disabled from demo version? any pages for information or wiki of all heroes and items and achievements?
Julia 2021-12-29
The game is really cool. I wish you creative success.
Lucky 2022-01-07
The game is amazing!! Thank you for creating the game!!
y4 2022-01-12
Goblins and Wisps are too strong. And they come in HUGE packs. Make them weaker and/or shrink the sizes of their packs. They should not be as strong as bosses.